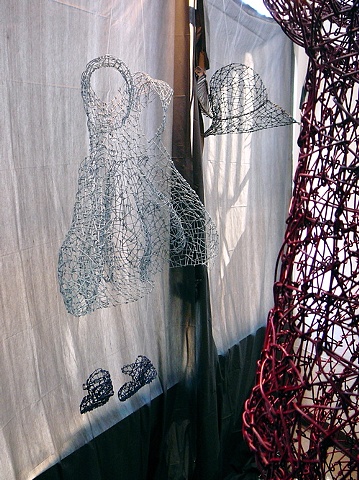 behind the scenes
< previous next >

I introduced myself to the owner of the store on the corner. In fact, the store is called ‘Da Corner’. He was a really cool older guy with a mellow disposition sitting in his store watching court TV shows in between his sales of t-shirts, hats, jeans, shoes, movies, gum, hair accessories and other apparel. At one point he even let me borrow his ladder. I also met a few of the neighbors who lived in the apartments above the storefronts. A guy named Ruben offered to help me and said just to knock on his door if I needed anything. He told me his wife Renee had just given birth to a baby boy and I congratulated him as he stood in his work clothes telling me about some kind of moving dolly he had if I needed it and beaming like a proud papa as he spoke of his son. When I told him about the art in storefronts program he seemed excited and pleased.